I remember Art Linkletter’s show, “Kids Say the Darndest Things,” which made me think of a few adult piano students and their hauntingly memorable words.

Yesterday, for example, I was forewarned by a 70-year old pupil, that I should expect a call from her during the night about the key of “F# minor.” What impending crisis was she talking about? Did it have to do with the Melodic form of the scale and its raised notes going up, but not coming down? Was it the temporary shift in fingering or the modal turnaround? I’d concede that the “melodic” was a cliff-hanger on the ascent with its “raised” 6th and 7th notes, but definitely a descending blow-out in its restored “natural” form. Would this duality catapult a student into full-blown despair?

The Circle of Fifths for Major and Minor Scales 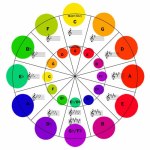 Wait a minute, my 70-year old, wasn’t assigned the more complicated Melodic minor this week. She was supposed to practice the NATURAL FORM with mirror fingers, 4, 3, and 3,4 on F# and G# in every progressive octave, with 3’s meeting on C# in both hands. We’d spent a few lessons on these reciprocal relationships and symmetries, though she’d planted her 4th finger on two different notes in the same octave, hoping I wouldn’t see the guilty left hand from my vantage point at the second piano. But my peripheral vision had been fine-tuned from hunting down crossed-hand notes with rolling eyeballs.

All humor aside, it’s always difficult to navigate scales that are not strict patterns of two and three-black key groups with thumbs meeting like those of B, F# and C# Major and their “enharmonics” spelled in flats: Cb, Gb and Db. But just about every scale has an internal symmetry that can be explored to best advantage regardless of its location on the Circle of Fifths.

In the case of C Major, the 7th note B crossing over C to D, uses finger numbers 4, 1, 2 in the Right Hand while the left plays 2,1, 4. The anchor finger over which 4 passes in either direction, holds things together.

In previous writings and videos, I also pinpointed where finger number 3 met in both hands, providing another internal organizer.

For the student who was rattled by F# minor, a scale that had a novel identity, we found a different location for mirror fingers, but still a helpful aid.

Another pupil, a US Attorney who’d been chasing robber barons in South Carolina, was worried that he didn’t get to the piano this past week, so he let me know in no uncertain terms by telephone and text message, fax, email, registered mail, certified mail, and just plain 3rd class snail mail, that his upcoming lesson would “just be a practice.” I wondered to myself, had he otherwise feared a public flogging in front of Starbucks?

He had done very well over the years, reconciling the relationship of scale study with his desire to improve his understanding of the Beethoven sonatas and other repertoire.

I’d previously mentioned Ralph Cato, the US Olympic boxing trainer who was my sparring partner for ten minutes following his lessons. Every week he’d use my staircase for athletic training and balance routines. Was I dreaming? Because his coaching was pert and perfect, I’d wished his precise directions were recorded for posterity, though they remain a lingering memory.

Up in the Bay area, a retired lawyer, used her iPhone to capture angles of her hand and fingers that were used as learning reminders between lessons.

I had started to believe these technology based aids were helping her and I had to get with it without resisting change.

She’d admitted that her first piano teacher, a nun in a rural Texas parochial school, had used a ruler to beat her hand into a rigid, arched position.

Oops, maybe I’d mixed her up with my paternal grandpa who ran away from the Cheder in Latvia after his knuckles were skinned with a cat o’ nine tails by the head Rabbi. He’d ditched his Torah lessons.

In a few years, none of us would be collecting colorful stories about our piano students. We’d be replaced by micro robots who’d comb the keyboard, electronically marking fingerings for every major and minor scale.

In retrospect, I should have appreciated middle-of-the-night calls from my 70-year old student. At least I could log them for a growing anthology of pianorama.

5 thoughts on “Adult piano students say and do the darndest things.”