I’m meeting a 5’2 Baldwin Hamilton in El Cerrito today, Sunday, and I’ll videotape the introduction for posting on You Tube.

This is the piano that had a verboten phone interview with a follow-up long distance tech eval. Good report, but the verdict is still in my hands when I run my fingers over its keyboard. Good looks do not guarantee beneath the polished surface character. (Sound familiar?)

Frankly, the finish is low on my list of priorities. For others, who demand drop dead exteriors, the preference might spell disaster, especially if the piano is nothing more than an eye-catching piece of furniture. (I’ve been down that runway when close friends chose florid musical partners on fancy websites. A few of these beauties had fluted legs and scrolled desks, a.k.a racks)

One buyer had a huge eye-opener when her mail-order bride arrived with a cracked harp. (cast iron plate) Or maybe it was a budding crack, like a fault in California, weakened to earthquake proportion, ex post facto. (after delivery)

In the “case” of a Proksch piano described in “FUNERAL for a CRACKED PLATE,” the conspicuous rift in the Capo D’Astro killed any tonal attraction the buyer ever had to this piano through her scanty online relationship with it. (The piano was located in rural Georgia, a long car ride from Fresno California, though the new owner eventually made the schlep to the boonies for legal purposes. It was a year or so after the beauty turned out to be riddled with internal problems) 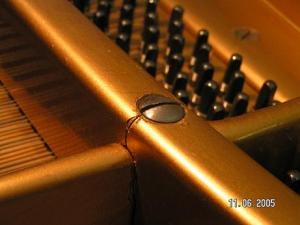 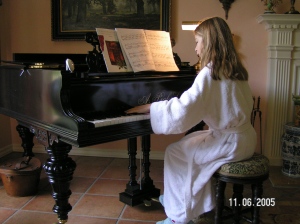 The buyer lost her “case” in court, but the exotic seller eventually got slapped with a hefty fine by the Feds for smuggling ivory into the country. He figured the elephant tusks would entice interest in his “rebuilt?” Bosies (Bosendorfers) among other imported inventory.

Recently, I received the following comment from a technician who knew the shyster’s antics up close and personal:

“The Bosen-like pianos that he sells are furniture only. They don’t have modern actions and play poorly. He sells them on eBay for 10k He buys them in Germany from people who have acquired them for very little money. They have exotic cases and are very light weight . They have horrible tone. An American spinet has better tone. Most re-builders will not touch these old pianos. They where very poor to begin with. The actions are very simple. The long key has a capstan in one end. It pushes up on a leather butt that pushes up on a hammer that is attached to a brass flange which often clicks. The touch is awful. These old European actions where terrible. I work in this industry as well and he makes the rest of us look really bad.”

Amen, to this fellow who had the courage to publicly post the Truth at my blog site. It was definitely a red flag for those captivated by a brand, without a necessary in-depth inspection of a piano’s interior by a capable technician.

Now given all the exposure I had to this particular seller who pitched a dubious description of the PROKSCH to a prospective buyer in Fresno, I had promised myself never to rely on AT and T or anything resembling, to choose a piano. Yet circumstances required an imminent replacement of a teaching instrument (not mine) that was at death’s door, and the phone, being within easy reach, was a tantalizing option.

The piano that piqued my interest, sat in the seller’s living room in Arroyo Grande, California, on the Central Coast.

Of speculation: Who did the so-called “excellent” rebuild of an instrument dating to to 1929? (I had acquired the serial number and matched it up in the Pierce Piano Atlas)

While a technician was selling it, he was NOT the original owner, and in any “case,” how could he be unbiased about a piano that embodied a profit by its sale.

(You can see why the upcoming blind date remained cloaked in suspense, not to mention FEAR.)

As far as I was told, the piano had a University-based history. Well, supposedly it bore a sticker with a Cal Poly inventory number.

An educated piano, perhaps? Tonal implications? Who maintained the piano?

The seller suggested that a fellow named “Richard Cummings” might have worked on it. Apparently, this regaled R.P.T (Registered Piano Technician) was one of the elite piano masters of Arroyo Grande. And from what I learned, he had relocated to Missouri in his retirement years leaving behind a following of fine piano owners.

I knew how it felt to lose a cherished technician. The aftermath could be of tragic proportion.

In 1989 my Steinway M, 1917 grand catapulted into crisis after a local tech “polished the knuckles,” and “filed the wippens.” He even “brightened” the treble, unauthorized transforming my life partner into a virtual stranger.

The ordeal, well documented in more than one blog, reached the Piano Quarterly, in a published article “How Could this Happen to my Piano?!”

To spare readers all the gory details, suffice it to say, that the piano barely survived an onslaught by more than one tech in a parade of them. In fact, my dearly beloved nearly died before its miraculous Resurrection through life-saving efforts of a Modesto-based SAVIOR.

(I’m PRAYING that my blind date was not comparably assaulted before its supposed “rebuild.” For all I know the “overhaul” could have amounted to applied varnish and hammer reshaping.)

Through a bit of Google-driven research, I had found the canonized Richard Cummings with God sent contact information.

In an e-mailed reply to my lengthy diatribe, he confessed openly that he never worked on my “newly” purchased piano, but had a fresh “lead” for me.

Perhaps an able tech named “Beverly” did the “work.”

So like a dog sniffing a bone buried deeply in the ground, I began my hunt for “Beverly” in “Arroyo Grande” and found an amiable woman speaking to me by phone about a piano she admitted was not one of her babies.

She mentioned “Forrester?” as a possibility in Oregon, sure to send me winding along a relentless trail. (Unfortunately, I’d lost the check stub with his scribbled name)

The plot thickened. A tech whom I had dispatched to review the Hamilton grand had a bit of a dubious connection to the seller, and I wasn’t sure about the quality of his work. He was definitely NOT mentioned by Cummings in his short list of numero uno techs. In fact the list amounted to ONE name–“Beverly.”

The tuning landscape sounded all too familiar. Here in Fresno, I could count one GOOD tech on my pinky, and that number was shrinking into the negative zone….

Okay Enough speculation and hand-wringing about my blind date.

JUDGMENT DAY is later TODAY, so I’ll have to wait patiently for the verdict.

Meanwhile, Stay tuned… I’ll be back Tuesday well after my tryst with this intriguing piano.

The Day of Reckoning, I meet my Blind Date in person: (6 videos plus CODA)

Funeral for a Cracked Plate

Do’s and Don’ts for piano buyers and sellers

The challenge of maintaining fine pianos after a personal tragedy

The voices of piano technicians around the country