I met 80-plus, sparkling Sonya recently at the Berkeley Fellowship of Unitarian Universalists, and discovered that her son, Renato, graduated Oberlin– small world.

It wasn’t long before my new-found friend invited me to join her as a choir concert companion to Hertz Hall, UC Berkeley campus. 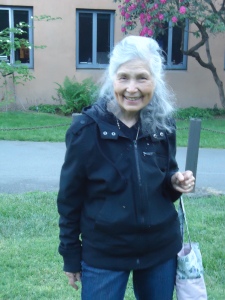 It was my first formal musical touchdown post Bezerkeley arrival, and I knew Sonya, with her cultural savoir faire, would lead me to the best seat in a modest, but intimate musical space.

She’d tipped me off about the most prime acoustical location in an early bird communication sent the night before.

“I prefer to sit in the center of the back row whenever a choral or symphony work is performed, because the voices blend better there.

“Also one is not regaled by the sight of mismatched socks &/or shoes of the musicians (;-)”

Sonya had pretty much taken everything into consideration in her seating plan, except for this:

We were square center, last row, happily anticipating “Songs of Spring, Songs of Praise,” offerings from the University and Chamber Chorus, when about 10 minutes into the program, an eye-catching visitor sat squarely in front of me, obstructing all but a trail of second violins and cellos.

Needless to say, I lunged for the nearest empty seat, and spared myself further distress. (a concert-goer to our right, was hangin’ loose, oblivious to any shuffling except for her disapproving glance at my friend for using a micro pen-light to peruse the program)

The concert proceeded on wings of heavenly song. Marika Kuzma, Director, was so innately musical, drawing impeccable nuance and phrasing from a chamber chorus of music, science, philosophy and undeclared majors. (They’re invited to perform in Carnegie Hall this summer, with a stopoff near ground zero) 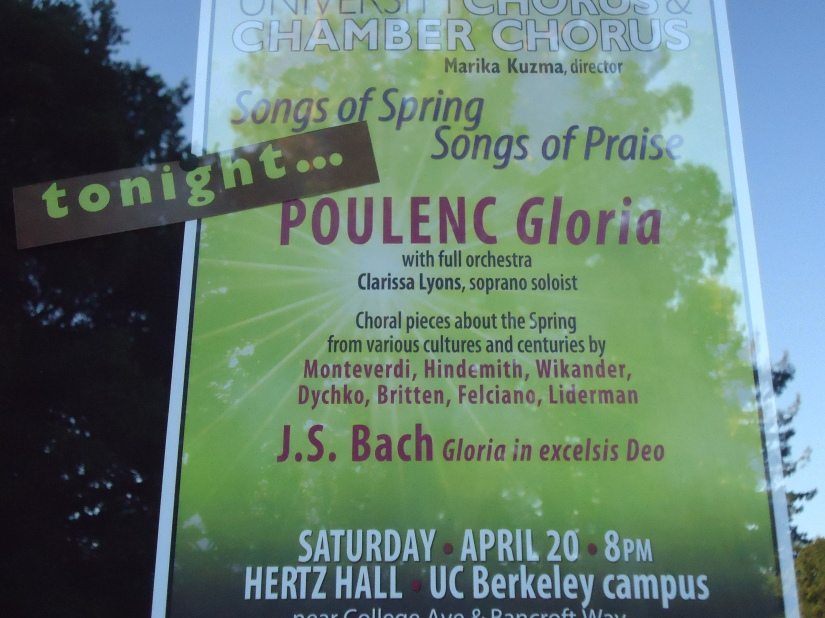 Sonya and I noticed that the young man who’d blocked a lion’s share of the stage as an audience member, had moved into choir-ranking status following intermission.

Here’s what we saw from our plum perches:

The well-capped fellow sang in the grand finale, Poulenc’s Gloria! earning the choir a roar of applause at its conclusion.

In retrospect, my seat was indeed the best in the house, beating out any keyboard-side pick over decades of concert-going!