Today I was greeted by a rare Piano Ped. Forum Facebook post that celebrated a positive private teaching day. Teacher C. reported that all students had arrived on time for lessons, paid their fees pronto, and actually practiced. Bravo!

Reams of peers LIKED the morsel of good tidings, except for one who JOKINGLY remarked, “Thanks for making me feel like cr-p.”

My Thumbs Up came with a personal supplement: “My Monday was equally gratifying until I was informed by e-mail that a prized adult student with whom I’ve interacted on a lofty musical level through her trials and tribulations of NOT practicing, (about 5 years) had decided STAND-UP comedy trumped piano. It’s no joke.”

But such is the life of a piano teacher with shifting winds, tides and unexpected surprises. Nothing in life is permanent or always predictable.

To compensate for my stinging loss, I admitted to having had a few credits in the up-swing column yesterday.

A new adult student, who embarked upon a musical journey with me turned out to be a perfect fit at the piano, with his bristling enthusiasm defying the clock as it ticked like an efficient metronome. (It was more welcoming than my Tuesday SKYPE student’s OLD GRANDFATHER CLOCK that marks off 8 laborious hours and ends the lesson with a dissonant encore of 9!)

Oops there goes the cat into her lap. Five minutes of more wasted time. 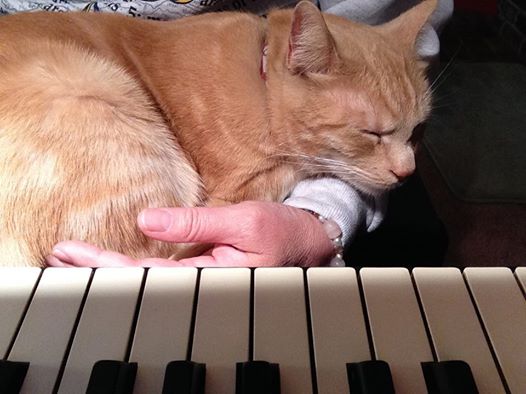 Teachers know the excitement of meeting a new student that ushers in a tabula rasa moment. How will he play? Is he a complete beginner? Where do we go from here?

Not being a method book apostle, I was hoping the moment of creation would be the framing mosaic for the very first lesson yesterday…

The young man who came with a thick self-made album of masterworks was already well-grounded in the basics with a searing hunger to learn.

All he needed was a bit of phrase sharing, singing tone awareness, and a basic technique to serve the music swimming in his head at mega intensity. I was up to the collaboration.

Here’s a snatch, with me sitting ultra-magnified at my Yamaha Arius as he was perched at the Steinway grand. A penta-scale launched a singing tone tribute as 8ths progressed through 16ths and 32nd notes in LEGATO. Short, crisp sounds followed as contrast.

His defined perky staccato was served back to me in a lovely articulation via the real piano. (No need for the blow-up screen of my digital as an assist. This new player to the roster was in the ball game to stay) And I’m NOT kidding!!

***
Other Hodgepodge NEWS updates: My second grand (acoustic) is en route to its home since the JOCULAR ex-piano student going Seinfeld, has no need for it. (was on loan to her) Shortly, a 1929 antique, chiseled Baldwin will be betrothed to my 1917 Steinway. Mazel Tov!! 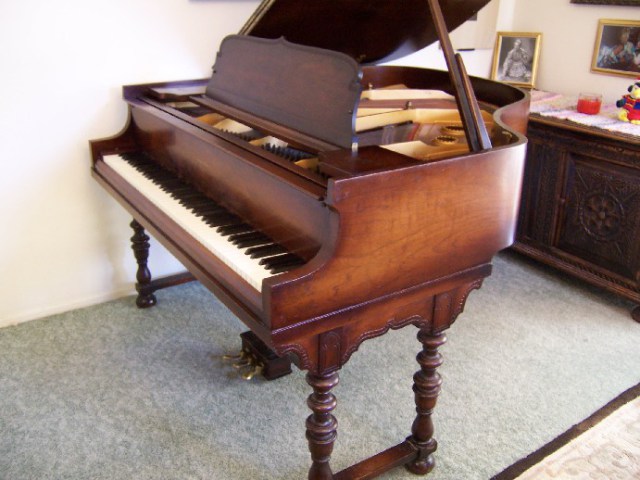 But will I have a place to sleep, under the groom-to-be Baldwin, perhaps? At the moment, I’m running out of space.

Overall, my Monday was a BIG PLUS, minus the DEAR S letter of withdrawal and career shuffling.

To be sure, Stained glass M., whose art I celebrated in music videos

played up a storm through the middle section of the Schubert Impromptu in Eb, and her framing “A” section in legato triplets was gorgeously fluid in its tempo advance.

And finally, Sam, on Skype from the UK wove undulating broken chords through J.C. Bach’s divine A minor Prelude.

To wrap it up, great leaps of musical progress abounded on a sunny day in Berkeley which I celebrated with a floral video tribute.

2 thoughts on “A Piano Teacher’s Hodgepodge Life with its ups and downs!”