As my local and Online piano students gear up for their bi-annual music sharing this coming Saturday over Skype, a commonly expressed concern is how to harness the imagination to feed a musical journey right from the opening measure of a piece to its final cadence.

The challenge for everyone embodies a centered period of silence, allowing a player to imagine the mood, timbre and tone of an opening phrase that will have a flowing impetus for others to follow.

This is why we observe piano competition entrants sitting quietly for what seems like an eternity. And we wonder what could possibly be on their mind during such quiescence.

I’ll conjecture that while it could be nerve-fighting strategies playing out in the psyche, it’s more likely to be non-cognitive, affective preparation. The imagination will fuel the playing, but it will have free reign only if preceded by phases of thoughtful, stepwise learning.

Yet some pupils will not have achieved an “in tempo” rendering at this coming Saturday’s music sharing, but each will need to be mentally prepared for the moment when they will be sitting at their piano benches in various locations, attempting to CENTER themselves, apart from the din of self-criticism and negativity.

…and here’s where I evoke the wise words of Mildred Portney Chase from her published diary, Just Being at the Piano. 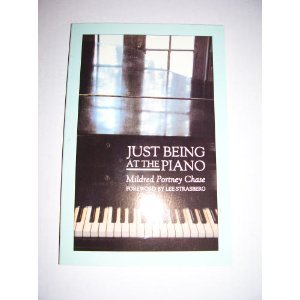 “I am continually finding my way toward the here and now in my music and realizing a whole new dimension to the experience of playing. Nowhere is it more important to be in the here and now than in playing the piano. The slightest lapse in attention will affect every aspect of how I realize the re-creation of a piece of music. One note coming a hairbreadth late in time, may distort the expression of a phrase.

“It is impossible to be self-conscious and totally involved in the music at the same time. Consciousness of the self is a barrier between the player and the instrument. As I forget my own presence, I attain a state of oneness with the activity and become absorbed in a way that defies the passage of time.

About tone and imagining it:

“Listening… feeling… moving…feeling… listening.. The core of any tone should always have substance and expressive quality. The singing quality of tone can be developed by sensitizing the ear to listen for it and sensitizing the hands and fingers to feel it as if they too were listening.”

And I will conclude by saying that harnessing the imagination in the cosmos of tone, touch, timbre and mood is a preliminary to beautiful, expressive playing–not forgetting to retrieve the memory of how it physically felt to produce musical beauty.

Tactile sensitivity fused with a self-devised creative image and ATTENTIVE LISTENING, will move phrases along in smooth, lucid progression.

In this vein, I recently recorded a portion of a piano lesson with an Online student where I explored a facet of the imagination as it applied to Tchaikovsky’s “Sweet Dream,” Op. 39 no. 21. While I used a “floating clouds” analogy, I could easily have drawn on a “dream” as a mental prompt.

There are many mood pictures that help pianists to get into the zone and out of themselves, so it’s a universe worth exploring.

For those of us taking a common musical journey, its fulfillment resides in more than playing the right notes with perfect rhythm. The intangible often makes music-making the ethereally beautiful experience that it is.