After 9 months of study, “Liz” whom I’ve followed at regular recorded intervals since her first lesson in mid-February, has been exposed to multi-tiered music learning that’s incorporated a Theory and Ear Training dimension. (Note the choice of Frances Clark’s Time to Begin as a 6 month Primer, with my imposed creative modifications that expanded composing opportunities) Tonal explorations were built into my custom-made lesson design as well, offering pentachords, executed with divided hands in Major and minor “parallel” tonalities before I nudged the student into 8 note hands-divided scales. (Again it was my decision to alter the time worn approach where each hand is challenged to autonomously deal with complex thumb shifts before integrating both.)

Nonetheless, through a Circle of Fifths driven scale and arpeggio journey, my student acquired the ability to transpose, based on a solfeggio-framed moveable “DO” orientation which coexisted with alphabetically driven note naming. The latter is derived from traditional scale progressions that flow in “whole” and “half steps according to the alphabet. In this pursuit, Liz has nicely absorbed the structural aspect of scale construction and can easily navigate Major, and relative minor scales in three forms. (Adhering to the division of hands.)

This particular decision that alters traditional Major and relative minor scale fingering by dividing 4 notes between right and left hand in a one-octave span, was an intuitive gesture that I believed put a priority on phrasing and shaping a line, with supple wrist, and bigger, relaxed enlistment of arm energies. The one octave limit of the scale, implemented with an equality between the hands would ultimately provide a “natural” springboard to traditional parallel scale progressions over many octaves. The latter scale expansion would ensue after the pupil’s journey through the cycle of Major and minor keys had obtained completion. (clockwise motion in fifths, acquiring sharps, and counter-clockwise movement in descending fifths, accruing flats)

Liz, as it happens, is unusually equipped on a cognitive level to process the analytical (structural) dimension of scale-building where such an intense, layered exploration might be out of reach for many piano students. That’s why I’ve always supported a custom-designed music learning journey for each uniquely individual student–one that is not codified or based on a method book driven set of formulas. (Hence, my unabashed rejection of color sequenced method books through ponderously pretensive levels has been well aired.)

At this point in her piano study, Liz has practiced Major and relative minor scales through the keys of A Major and F-sharp minor. (From eighth notes, to 16ths to 32nds–legato to staccato) As pertains to F-Sharp minor, I’ve adjusted fingerings as illustrated in the attached Scale video with a particular change made in the Melodic form.

In the Arpeggio cosmos, I’ve supported hand-over-hand triadic movement that spans 4 octaves to prioritize agile shaping and contouring. (Historically, the student started with two-octave arpeggios and incrementally expanded to 3, followed by 4-octave travels.)

Through hand-over-hand transit, (LH fingers 5-3-1, and RH 1-3-5) Liz has learned to nicely “shape” the triplet flow of broken chords between the hands without the obstacle of bringing the thumb (root) under the “third” and “fifth” (middle notes)

Prior to Circle of Fifths scale study, Liz was deeply embedded in “pentachords,” or five-note progressions, BUT NOT using fingers 1-2-3-4-5 in the Right Hand, and 5-4-3-2-1 in the Left Hand.

Instead, I had her divide the five-note progession between her hands.
(2 notes in the LH using fingers 3 and 2, and 3 notes in the Right hand, using fingers 2, 3, 4. This particular division nicely fleshed out the MAJOR and PARALLEL minor key relationships by having the critical and decisive THIRD note arrive as the first note in the Right Hand (finger no. 2) that altered tonality. In this regard, the student was repeatedly prompted to make an affective or “emotional” shift from Major to minor with “attentive listening” as an important underpinning.

While the pentachords proceeded through the Circle of Fifths, they could not realistically acquire sharps and flats that would attach to 8-note scale progressions. Still the journey, though attenuated, acquired an understanding of the Parallel Major/minor tonalities that integrated a companion EAR TRAINING experience.

Liz’s most recent lesson reveals how far she’s traveled over nine months time.
Following a stint with Time To Begin, I transitioned her to Accent on Gillock, Level 2, that has enticing character pieces with wedded musical and technique-driven goals. 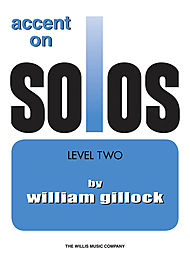 In this vein, I’ve recorded two pieces from the collection–the first, “Splashing in the Brook,” is Liz’s newest assigned piece, though she’s simultaneously refining “Little Flower Girl of Paris.” (Following “Splashing in the Brook” we will embark upon the delightfully spun, “Sail Boats” that’s included in my recording)

The additional video below throws a spotlight on the most recent lesson segment that focused on “Little Flower Girl…” where the student has the challenge of fleshing out a cantabile legato melody in the Left Hand against Right Hand after beat harmonic thirds and seconds in staccato. The voices are inverted in the second section, along with a key shift from C Major to G Major. (Liz fully comprehends given her ongoing Theory exposures)

In the ear-training universe, Liz is learning to build and aurally identify Major, minor, diminished and augmented chords. To this effect, she has been given a chord sheet that tags these triads on every scale degree of C Major and ‘A’ Harmonic minor. (Theory and Ear Training are nicely interwoven)

In the attached recorded segment Liz specifically splits a triad in half, to construct a harmonic third between notes 1 and 3, and the same between notes 3 and 5. She has learned that a Major third plus a minor third equals a “Major” chord, and in reverse, a “Minor” chord. The “Augmented” and “Diminished” chords have also been carefully constructed with an integrated EAR TRAINING awareness. In this connection, I use “Do a Deer” from Sound of Music to track the first three notes of a Major progression from the Root to Third. (whole step/whole step) and then juxtapose the sad “Do a Deer,” (Whole Step/half step) through the first three notes of a MINOR scale. The pupil then splits a particular chord in half–analyzing the first to the third note as Major or Minor, doing the same from the third note to the fifth note. She then combines both to determine the identity of a chord. I’ve also exposed her to the instability of Diminished and Augmented Chords and how they have a pull toward “RESOLUTION.”

In summary, Liz has made enormous strides in cognitive, affective, and kinesthetic realms that span her 9 months of lessons. And even from the start of instruction, the fundamental focus on relaxed, “weeping willow” arms, supple wrists, and whole arm energies to advance a “singing tone” has been the underpinning of all her music-making.

Without doubt Liz has enjoyed a journey that has grown her sensitivity to tone production, dynamics (with weight transfer awareness), phrasing, and the ebb and flow of harmonic rhythm. In the Rhythm cosmos, the student understands the “color” of various rhythms and how BREATHING is intrinsic to well-shaped lines. Above all, ATTENTIVE LISTENING has been a central component of all her music-making that has a pivotal structural and aesthetic dimension.

***
BONUS video –JUST FOR FUN
Liz explores a Schoenhut Toy piano which enlisted an easy transfer of her Keyboard skills to a childlike universe.

P.S. Many of Liz’s lessons from Day ONE are available on you tube and these videos have been embedded into a series of blogs. (a few are sampled below)