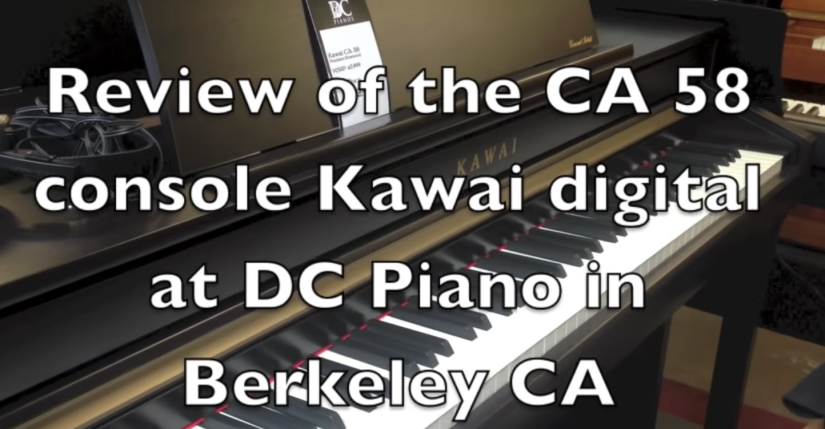 Every so often, I find myself at the local piano outlet, tinkering with the latest digitals on and off the shelf. (portables and consoles) And as the weekend rolled in, I was invited to DC Piano by a new student who’d purchased a Kawai CA 58 console electronic without my input.

No doubt, my prodding preference would have been to go Acoustic, but given slim options and disappearing living space in Berkeley, I was resigned, in the short term to deal OFF LINE with slippery slopes, tinny sounds, and false hammer-weighted claims.

In just a few lessons, the chasm of tone and touch via the Kawai digital as compared to my Baldwin acoustic grew wider.

During lessons in my heavily weighted acoustical environment, phrase-shaping that included contouring and dynamic variation could not be adequately transferred to the electronic following our LIVE in-person meeting. A sense of grouping notes in a crescendo to a peak, rounded destination, was deterred by land mines interspersing plugged-in octaves. (Unsettling physical detachment, lack of control, and inconsistency of touch and tone were at the core of the electrically-charged playing experience.) Essentially, my pupil felt off balance playing the Kawai during home-based practicing intervals.

At Berkeley’s warehouse-charged Piano hub, the reigning ruler of the acoustics and electronics is Kawai. And to be seated at a CA58 Kawai, $2995 model (minus tax) with Wooden keys promises everlasting bliss through a recreational –pop to serious Classical journey.

My eval, in the aftermath of a deluge of pupil-driven complaints, had the central intent of being objective and open to experimentation. Still, a dizzying set of settings loaded into the electronic tank was overwhelming, tempered only by a student who was holding the manual, reminding me of what I tapped and what it produced. Improvements or deficits became the theme of our mutual self-discovery as we plodded through permutations and combinations of options.

Among the three settings I’d sampled in various combinations were: the instrument sound (SK ConcertGrand vs Upright), the Touch setting (from Heavy+ down to Light+) and the Half-Pedal Adjust (1-10). NOTE: The manual indicates that the Half-Pedal adjustment affects the sensitivity of the pedals, with 1 being the most sensitive and 10 being the least. I tried the 5 pedal settings with Upright and Heavy+ touch.

In summary, the positive adjustments made on the CA 58 were the result of a shift from the concert grand piano setting to Upright, adding Heavy+ for touch, and “5” for pedal sensitivity.

One area of assessment I did not include, was related to the “feel” of “wooden” keys. Based on a comparison with garden variety plastics used in many digitals, or in the case of some upper echelon keyboards, an ivory-based synthetic, I’d say that click snap releases were minimal with wood, but I wasn’t necessarily more grooved into the Kawai console’s keys as compared to my Yamaha P-255 digital.

Here’s a snatch of the Yamaha P-255 that affords a nice panoply of dynamics, though it has tonal areas that display the tell-tale thin, tinny signature of an electronic. One can compare its performance to the CA58.

Finally, to draw acoustic pianos into the mix, I uploaded side-by-side playings on my Baldwin and Steinway grands, offering Bach’s Little Prelude in D minor, BWV 935 on each. (Further insight can be gained by revisiting the same selection rendered on the Yamaha P-255.)

In a word, take your pick, but do it thoughtfully!

1 thought on “A week of digital and acoustic pianos!”